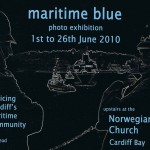 The Maritime Blue Exhibition held in 2010 was a celebration of a hundred and twenty-seven years unbroken policing service at Cardiff Docks between 1858 and 1985. Fifty-six black and white images were on show. The exhibition was supported by the British Transport Police History Group (BTPHG) 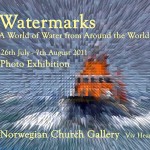 The Watermarks Exhibition was held in June 2011. It had as its theme the world of water from around the world and included fifty modern colour photos drawn from subjects as wide as pirates, glaciers and liquefaction from the New Zealand earthquake.