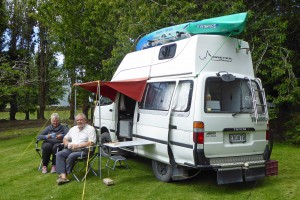 I have been traveling to New Zealand from my native Wales for more than twelve years, staying up to six months at a time. I feel at home there. My partner and fellow traveler, Betty, lives in Christchurch and together we own a tough 4WD Toyota Hi-Ace campervan known as Myfanwy. I feel an affinity with the old girl with a Welsh name, neither of us are in the first bloom of youth, she is past twenty-five years of age. And we share something of a rugged exterior, a love of the outdoors and the urge to see what is around the corner. Myfanwy carries everything we need, often including two cycles on the front and a kayak on the roof; the netting over her side door is almost sandfly proof. She has toured every corner of the South Island and much of the North Island, sometimes with two of us aboard, often just with me. There is a quote above the windscreen- From the Mountains to the Sea. It perfectly describes her existence; she has felt the sand of beaches, the spin of gravel on back roads and perched loftily on mountain tops, looking down on rolling clouds unfolding in the valleys below. The West Coast road from Jacksons Bay to Kohaihai has often been visited, so too the Rainbow Road and the Molesworth Track. In 2015 Myfanwy supported four septuagenarian cyclists and another who is close, through six days and 300 miles (500 kilometres) of this rugged Marlborough high country. She carried the stores and tiny lightweight tents; her kettle whistling steam for smoko and supper all along the Rainbow wash-outs, and the magnificent backdrop of the Molesworth.
And is there any other way to get from the Canterbury Plains to Southland other than by leaving the tar seal behind and taking to another High Country route, crossing the McKenzie Basin and Danseys Pass to reach Millers Flat by way of the Lake Onslow track? A route we have taken in summer and in winter when the domestic water system froze solid overnight.
We were at home when the Christchurch earthquakes struck in 2011; Myfanwy became our refuge for several days when, marooned beside the estuary, we flattened the battery listening to the news on the radio, our only communication with the outside world. In time, when enough cracks in the property had been stitched up, we moved back into the house and Myfanwy spent her time ferrying building materials until the dreaded Red Zone announcement meant we had eventually had to move away.
As someone who likes to write (a small book shelf has been squeezed into her already well-fitted interior) and put paint onto canvas occasionally, Myfanwy has often been a desk and easel as well. She has taken me to places I would not otherwise have seen. There are so many rugged, beautiful, inspiring, often empty, places in New Zealand; sometimes I feel that there are just the two of us and that Myfanwy has something of the old pioneering spirit about her.