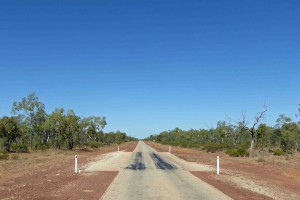 There are longer and lonelier roads in the outback but the 230 mile (380k) road from Normanton through to Cloncurry is lightly travelled for sure. Mostly, it is a good two lane sealed highway, but there are some long stretches of single lane tar laid in the centre of a two lane dirt road. Hog the middle tar when you can, which is most of the time, but when an on-coming vehicle does appear, move over to put the nearside wheels on the dirt and share the tarmac; unless, that is, the on-comer is a 120ft road train- then head for the dirt and leave the tar seal vacant, the mammoth will probably devour it anyway.
The road is a narrow strip in a vast savannah that is at once uniquely the same yet so different and so full of life; we slowed for an emu that was crossing the road in front of us and took avoiding action to miss the many carcases of unsuccessful kangaroos. (We have learnt from experience not to straddle and bounce them with the undercarriage, the smell has a tendency to linger…) We crossed the Flinders River on the old, disused road and watched a flock of fifty tiny green birds darting and diving in perfect choreographed formation, a performance that denied understanding. Then there are the termites. There are millions of square miles of savannah in the outback and a thousand termite mounds in each, with ten thousand termites to the mound. How many termites is that?
Although careful about leaving food around, we found that some of those pesky tiny ants that can gather into a hoard in the blink of an eye had made an unlawful entry into an opened packet of dried fruit and nuts. We (Betty!) decanted the contents into a zip-lock bag, picking out most of the critters in the process. The new bag went into the freezer so that any remaining little blighters would suffer a fatal dose of hypothermia to end up as crunchy as the rest of the contents and pass unnoticed.

Somewhere over half way, is the only sign of habitation along the road’s entire length. The Burke and Wills Roadhouse is an oasis of activity, serving fuel and food and a place to lay your head. But it is an outback set up; every night the red earth pull-off areas are lined with road trains of three or four enormous trailers, rolling to a stop breathing a cloud of dust, red brake lights and hissing air brakes. The food is simple, beef burgers are good and the camp ground is more drovers camp where power is scarce and there is no fresh water. A 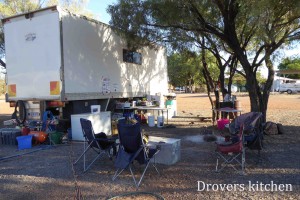 gang of a dozen musterers had set up a base camp- trucks, horse-boxes, dogs, a big camp kitchen and a tree draped in motorcycle helmets. It is hot and dusty and scavenger birds lurk everywhere. The place wouldn’t get many stars from the caravan club but it had a certain appeal, though that may have had much to do with the fact that there wasn’t anywhere else.
Nevertheless, we did not rush away in the morning, but wandered around what is after all an interesting place, taking photos and leaving footprints in the dust and the cow pats. When we turned south again, we took a short diversion to explore a side road that became a reasonable airstrip before reverting to a road that led towards a mine in some distant hills. It is a dedicated emergancy airstrip for the Royal Flying Doctor Service, a service held in high esteem by all of Australia.

Nearing our destination, we spotted a name on the map- Quamby. In fact it consists 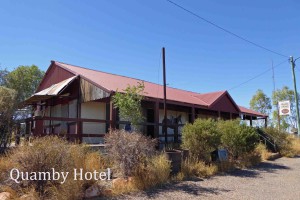 solely of the Quamby Hotel, a quirky looking place that describes itself as ‘the pub in the scrub’. We were keen to give it our custom. A small two-roomed, single story corrugated tin hostelry, where the word Hotel was an exaggeration even in its heyday. Regrettably, it had closed its doors a year or more ago and had since been broken into and ransacked. A shame that another out-of-the-way pub has bitten the dust. Cloncurry was but a few miles away and a virtual metropolis with a population of more than 2000 souls.