From time to time, you come across people who have done some quite extraordinary things. Carol Geraghty is one of these; with her two teenage sons and four horses she has journeyed from her home in Guildford, Victoria to Cooktown in the Far North Queensland. She had not quite reached the end of the journey when we met them, but it had by then taken them sixteen months across more than 5,000 kilometres (3,000 miles) of Outback Australia using old pack horse and bullock tracks and the Cobb & Co. coach trails of yesteryear.
But Carol’s journey has not just been about crossing Australia. About the time her youngest son was born on 2001, her husband was involved in a motorcycle accident that left him with severe spinal injuries and brain damage. Later, she was attacked by an intruder in her home which left her physically injured and suffering from depression, and she still had two young boys to bring up.
The idea for the journey went back to 1990 when Carol read that some of the old stock routes were being opened up. It was a thought she nurtured for more than twenty years until, when Jacob was fourteen and Walter-Luke was twelve, she decided the time had come. Yes the boys would miss some schooling but she felt that the experience of the life they would have on the trail would be of far greater benefit.
They were camped at Rifle Creek rest area near Mount Molloy when we met them, their four horses corralled in their single strand circular electric fence. Beside it, was their small orange dome tent where mum and the two boys slept and beside that a small mountain of saddles, bridles, horse packs and cooking gear. It must be a nightmare when it rains. They carried all their equipment with them but were sometimes reliant on station owners for food for their horses. What is perhaps the most extraordinary thing is that two of the horses were pack horses to carry all their gear, while the boys rode the two saddle horses. Carol herself has walked every step of the way. 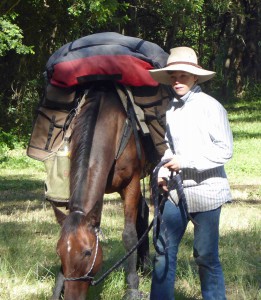 We watched them pack up the next morning, a process that took the best part of two hours, then, as they strung out along the path, we saw that one of the boys was also walking his horse. It had swollen withers and they were heading across the Great Dividing Range to the town of Mossman to find a vet. They camp in the bush whenever they can and navigate with a map and compass but no GPS; they do however carry a mobile phone and a Personal Locater Beacon (PLB) in case of real emergency. One of Carol’s greatest worries in the final stages of the journey was crossing the Daintree River especially with the horses, it is a place where crocodiles abound.
Ten days later, they walked into Cooktown, their journey at an end. Both the boys are quiet by nature and it will be back to school for them when they get home. But has Carol says- The hands-on experience and all the things they have learnt along the way has made them grow in confidence, learn life lessons and become even better people, something no classroom can ever teach. 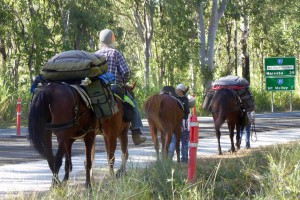 Many of the friends they have met along the way chipped in to get the family home and a specialist horse transport company generously supported them in getting the horses back to Victoria. Carol is an inspirational person and a dedicated mother; her sons should be proud of her, and of themselves, for what they have done. It is something even beyond the imagination of most ordinary folk. Well done the Horse Family.