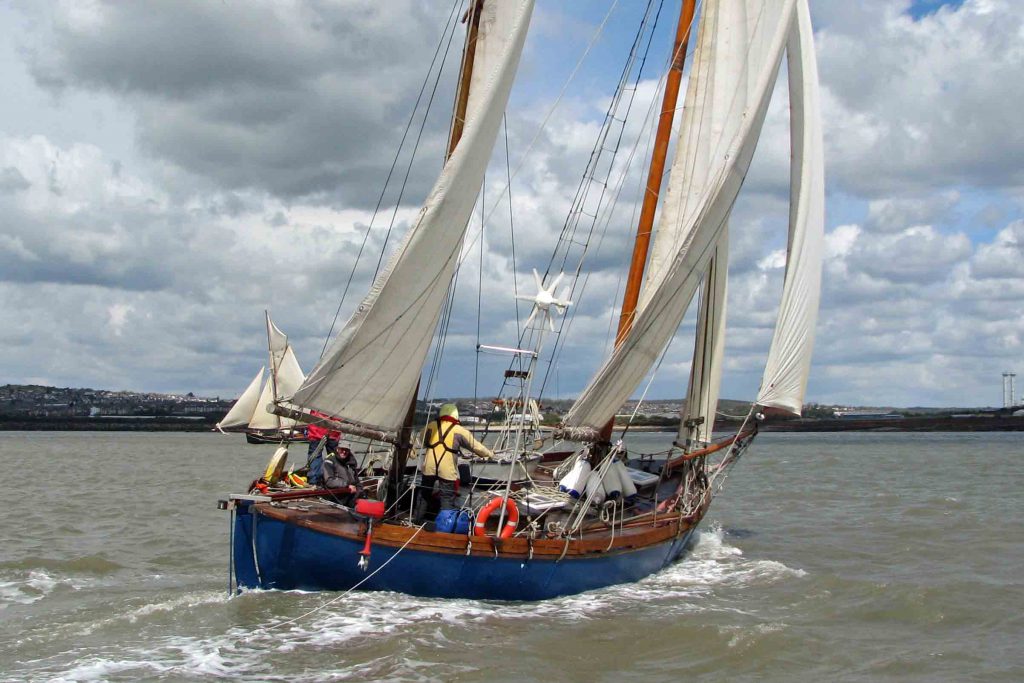 Working Yacht 1 at the start

Since 1936, Barry Yacht Club has been organising the Cock ’o the Bristol Channel passage race. In 2016 the race began on the 30th of April; it was a long course taking the boats to the edge of the Celtic Sea. Starting from Barry, leaving Lundy Island and the West Helwick Buoy off the Gower coast, to starboard and back to Barry. 125 miles as the seagulls fly but sailing boats are not gulls; with much of it into a headwind, it was more than 200 miles. As always, a handful of the remarkable Bristol Channel pilot cutters were taking part. Many OGA boats have entered over the years, a few, a very few, have even won it. In this the 80th anniversary of the race, John Laband had entered Working Yacht 1, the 50ft gaff ketch, aboard which he is to be found cruising the Bristol Channel and beyond, often single-handed.

On this occasion John had taken on a crew of three to help get the boat get around the course. Les Willis, who was press-ganged from a Cardiff pontoon, Pierro Tassinari and me. The start was set for 12 noon on Saturday; skipper John Laband tried to take WY1 around to Barry on Friday afternoon but was turned back by some ferocious weather off Lavernock Spit. Still, the forecast was said to improve for tomorrow and so it did.

The big ketch left Cardiff at 0800 on Saturday morning and we made the 7nm passage to arrive off Barry Harbour in plenty of time for the 12 noon start, an hour before high tide. Seven boats competed including five pilot cutters- Agnes, Alpha, Dolphin, Mascotte and Olga. That left the beautiful gaff cutter Jan Roelan and ourselves to complete the fleet. Conditions were good with only light NW winds predicted for Saturday (ha!) and increasing SW on Sunday but still reasonable. Jostling for position in the calm before the start it was a spectacular parade of sail, glistening in the sunlight. 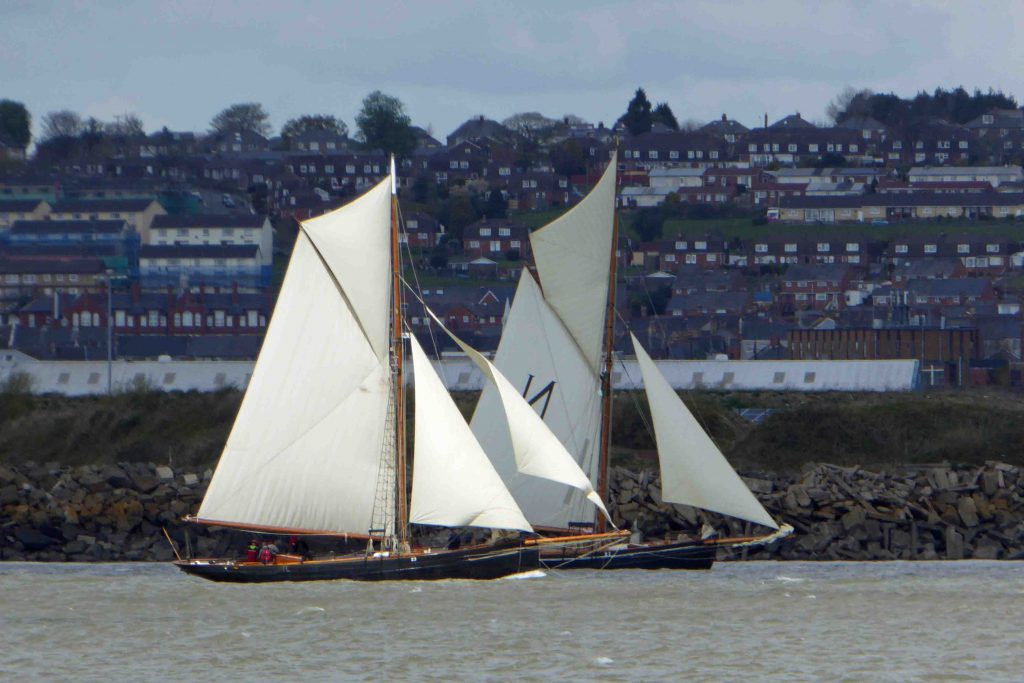 First tack was across channel to the English coast in fairly light winds. Then the breeze quickly turned  into half a gale at 20 plus knots and with wind over tide conditions, short steep 3-4 metre waves became the norm. (It was not long before a serious bout of mal-de-mare meant I apologetically spent most of the night hours in a bunk but recovered reasonably well the next day.) Then came endless beating against the flood and into a headwind, tack, tack, tack and tack again. With 12 metre tides being routine, dealing with them is always a challenge in the Bristol Channel. At last came the return of the ebb; it was an all-out push to get around Lundy Island but we were almost beaten by the tide once again. We just scraped around the south west corner, admiring the wonderfully close and menacing outline of Black Rock protruding from a turbulent sea! The skipper murmured more to himself than anyone else, Why is it that all these evil slabs always seem to be known as Black Rock? It was now 20 hours after the start. 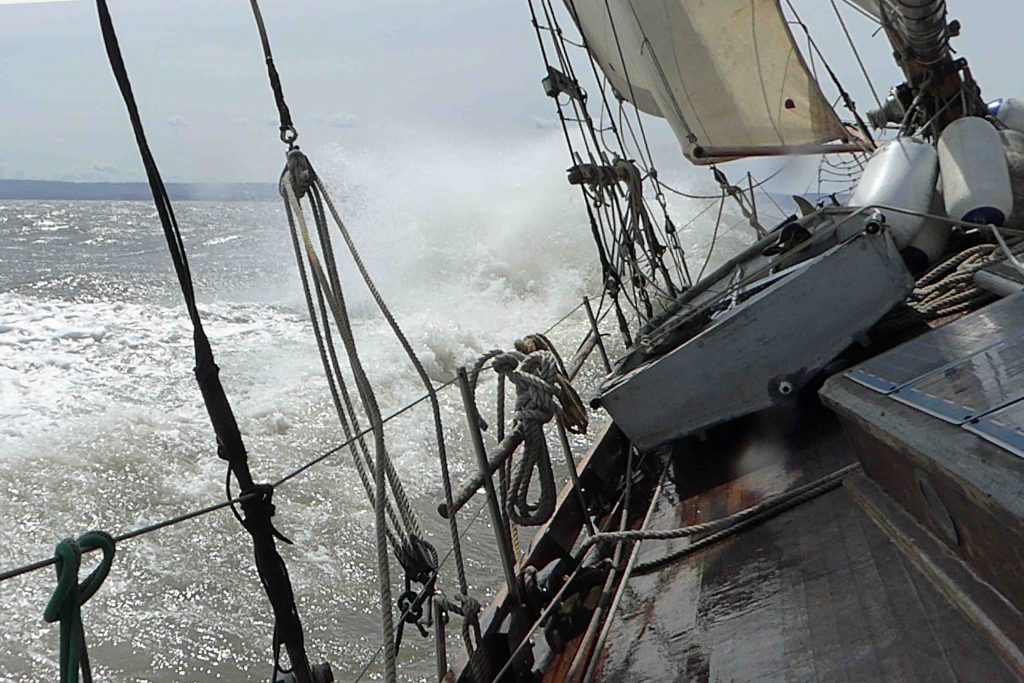 We careered across channel on a reach to round the West Helwick cardinal with Working Yacht 1 making ten knots over the ground. It was raining by now, that nice, damp, all embracing ‘Welsh’ rain. Some of it even found its way inside WY1’s ferro hull, bless it. But it was nothing a man with an old paint pot couldn’t handle. As we closed on Nash Point, the expected stronger winds gave way to a calm, even though the inshore forecast was still giving F5 to F7 for the Bristol Channel. Some of the fast cutters spent several hours at anchor here waiting for the wind and at one time we and three other vessels were in sight of each other after some 32 hours of racing. The three of us late arrivals found a zephyr and managed to keep moving, creeping past the brightly lit Aberthaw power station that seemed to take half the night to finally slide astern.

When the wind died away completely, we were at the mercy of a tidal drift taking us towards Barry, albeit much of it stern first! Then the tide turned and the beginnings of the ebb set us drifting back down channel. No more than a mile and half from the finishing line we dropped anchor and lowered sails prepared to wait for some wind or the flood in another six hours. The pilot cutter Dolphin half a mile astern of us, did the same. Just as we were settling into bunks, the ship heeled a little- we had some wind at last. Not much, but enough to send the crew scurrying on deck to raise anchor (with some difficulty) get some sail up and slip lazily over the finishing line a little before 4am. We sailed on, straight back to Cardiff- three hours sleep (after next to none the night before) then to Barry Yacht Club by road for the prize-giving lunch on Monday.

The pilot cutter Mascotte was first over the line but the Cock o’ the Bristol Channel cup was awarded on corrected time to Dolphin, the pilot cutter astern of us as we drifted so lazily back to Barry and who was in fact the last boat to finish. Delighted to report that Working Yacht 1 was awarded the Tern Cup for the best non-pilot cutter finisher. This was the 80th year of the running of this race- both cups were first awarded in 1936 and there are many famous names engraved upon them. It was indeed a memorable experience, in company with some fine vessels, skippers and crews. Just to participate was an honour and justifiably worthy of an entry in the sailing CV.