New Brighton, Christchurch, South Island
It was blowing a stiff easterly as it seems to do more often these days. A Saturday morning in mid-summer with no more than a dozen people along the flat, sandy  beach stretching for miles in either direction. Among them, two olive-skinned women, chattering in a foreign tongue, carrying plastic bags stuffed with healthy greens from the nearby Saturday market. 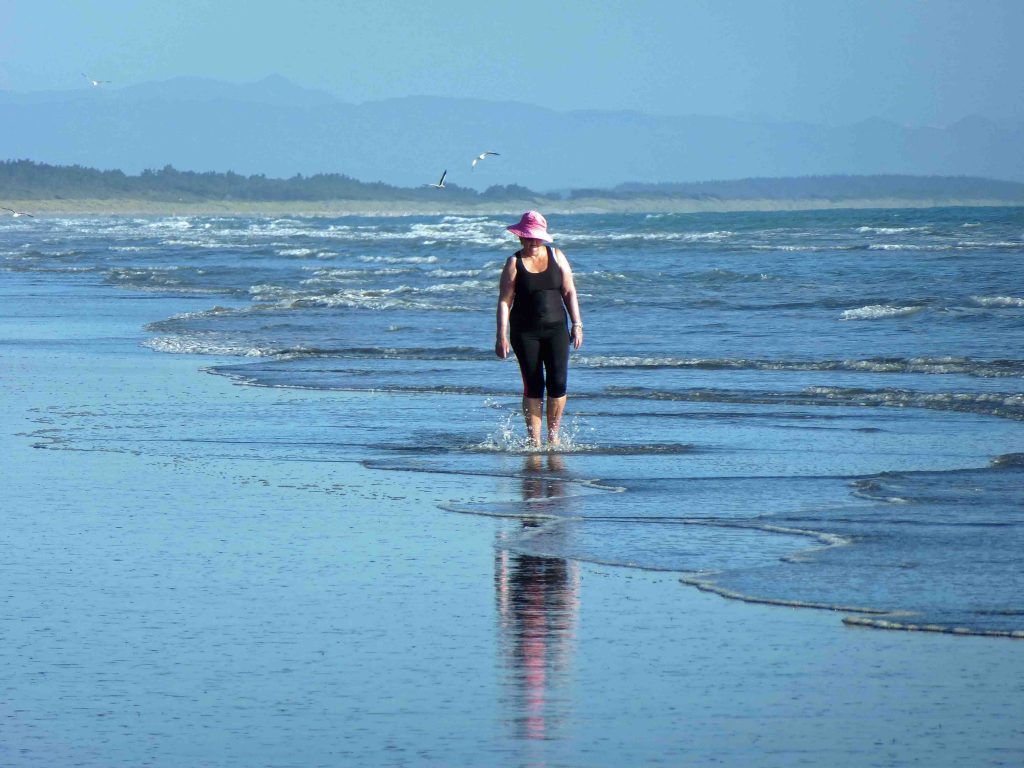 We walked to North Beach surf club, splashing footsteps in the shallows that rippled away in a couple of breaths. Spent waves receding quickly, a mass of silver strands rushing to greet the next incomer. The tide was out, leaving behind bright wet sand reflecting our own figures as well as the blue sky above.  A few idle wisps of cloud hovered above the Port Hills, otherwise, only a couple of fading vapour trails from aeroplanes long since gone by, shaded the blue.
A week ago, the South Island had been hit by what doomsday weather forecasters were calling a weather bomb. It missed Christchurch altogether but a deluge of rain fell on the Southern Alps beyond the Canterbury plains, filling rivers to unseasonable levels. Landslides closed the main road through Arthurs Pass for a week; the mighty Waimakariri River carried volumes of tree trunks and debris into the sea. The beach here was littered with them. Yet now they have mostly gone again, washed back out to sea, leaving a pristine beach cluttered only with knots of thick kelp at the water’s edge.
According to the woman who knows, the surf was too messy for any good sport today but we could not resist the temptation to test the water… She was right; confused and boisterous rollers came at us this way and that, driven by the easterly from somewhere deep in the Southern Ocean. The water was relatively warm (for the South Island) and there wasn’t too much of a sideways pull towards the pier. It was a refreshingly short dip. It would be easy to take all this for granted yet we are careful not to; this often isolated place of long skies and ocean spray. We left it to the black-backed gulls searching for pippies to drop time and again onto the hard sand; eventually breaking the shell sending the big gull swooping down for breakfast. Speaking of which…