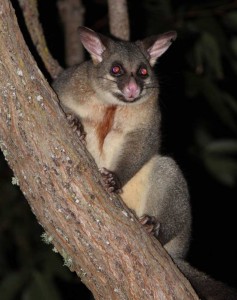 At 2.30 in the morning I was woken by the sound of an animal eating- loudly! It was a new sound, much louder than the mob of black swans still mewing on the estuary. The sliding door was open and I crept out onto the balcony where we had slept out under a rash of stars the night before. The sound of mighty munching was coming from the corner of the garden; it paused as I leaned over the rail peering into the darkness, and then resumed. I could see nothing. By the time I found a torch the munching had stopped; whatever it was had moved on.

In the morning I examined the scene; that corner was considerably less dense than it had been and some of the branches had been stripped. The most likely suspect is a possum, not entirely unknown in New Zealand, having somehow crossed the Tasman Sea from Australia, but unheard of here in Southshore. So not only are we being forced out of the house by the earthquakes, we are being eaten out of the garden by possum as well. Whatever is the world coming to?