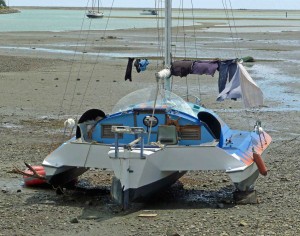 I invariably have one or two photo projects on the go and have recently finished two long term ones. The first was a daily photo throughout 2013- happily concluded without missing a day. (It is refreshing now not to have a camera in my pocket wherevere I go!) What shall I do with them? I’m still thinking about that. The second, spread over two or three years, has been to make a photo-journal of State Highway 6 which at 1,000 kilometres or 600 miles, is the longest road in New Zealand. It begins at a roundabout at Blenheim, sweeps across the top of the North Island, becomes the Glacier Highway all along the west coast, crosses the Southern Alps at Haast to pass the adventure capital of the world at Queenstown, through rural Southland to finish at another another roundabout at Invercargill, the southernmost town in Australasia. It is a fascinating road with many different faces and people. I have covered it all at least twice and it has been a joy. The photo here is of a small live-aboard catamaran beached beside the road on the outskirts of Nelson.

And the Passages? I am leaving New Zealand in a couple of days for a four day flight passage to Ushuaia on Tierra Del Fuego to await the arrival of the expeditioin ship Sea Adventurer. Then another journey, of a different kind will begin. A sea voyage to the South Shetland Islands, the Antarctic Peninsula and South Georgia in the wake of Ernest Shackleton. All being well I will be home to Wales in the middle of March. Is not the world such a small place?